Association “the Road of Christian Europe”

Created by Robert and Claudia Mestelan in 2006, this association of secular Catholics is committed to defending the roots of Christian Europe whose origins date back to the apostolic times (Saint Lazarus, first bishop of Marseille, Saint Maximin, Saint Marie-Madeleine, Saint Peter and Saint Paul, all the apostles): this with united evangelizing actions.

After noticing that the evangelization of Europe was initiated by monks and pilgrims from the 5th century onward, it wishes today to take part concretely to its re-evangelization, drawing its inspiration from the principles of the “Peregrinatio ad Dominum” of Saint Patrick and Saint Columban. By returning on the paths of pilgrimage, the men and women of the 3rd millenary will find again, silently, the deep relationship that unites them to the Creator and His Son, the Saviour. On this road, through the action of the Holy Spirit, the Virgin Mary greets us in her immaculate heart. She will lead you to the Holy Heart of her Son, the Sun of Love. 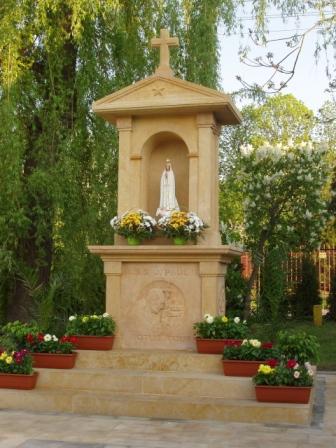 Methods of action
The Road of Christian Europe organizes and leads four kinds of activities:
1. lectures about pilgrimages
2. pilgrimages on foot
3. pilgrimage-travels to meet the Catholics of Europe and pray with them
4. finally it creates or restores in Europe and in France all Christian symbols (calvaries, crosses, oratories, chapels, churches, statues, mosaics, icons). Its only commitment criterium is the maintenance of faith. The works are carried out with the help of benevolent persons.

Oratories
Oratories, modest monuments, are the markers of Christian Europe because they lead to sanctuaries, masterpieces of Christian architecture and witnesses of our faith. The small oratories, real highlights, assert the permanence of the continent’s Christian roots: in each of the 27 countries that make up the European community, we want to build one. 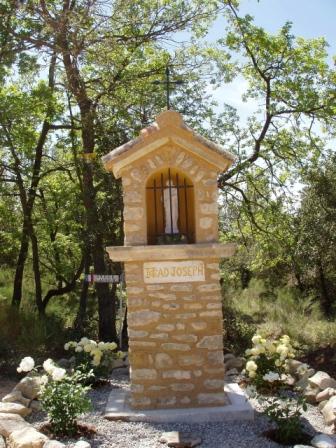 Routes
Starting from Fatima, Bangor, Kiev, Wadowice or Malta, the Road of Christian Europe is a path of praying, whose central character, Our Lady, will be able to visit all her children, once separated by a wall. On the big median axis, crossing Europe from the west to the east, confluent of numerous transversal roads: the Italian axis, starting from Malta, goes through Sicily, Saint Peter of Rome, Assisi and Our Lady of Lorette, the Greek axis, starting from Patmos, goes through Santorin and Tinos to reach the continent and the Balkan peninsula, the Iro-Celtic axis of the road of the Angels, starts from Gargan and goes through la Sacra di San Michele, the Puy-en-Velay, the Montaigu, the Mont Saint Michel, the Michaels Mount in Cornwall to end at the Saint Michael monastery in the Skellig islands on the western coast of Ireland, the northern axis starts from Our Lady of Paris, crosses Belgium and the Netherlands to reach Sweden of Saint Brigitte and the northern countries.

The big and small sanctuaries of the Blessed Virgin, the places where saints lived, the paths walked upon by evangelists, will be thus honoroued again. Enhanced by the building of an oratory, these paths of pilgrimage, thus reanimated, will enable Europe to remember the faithfulness to its roots. 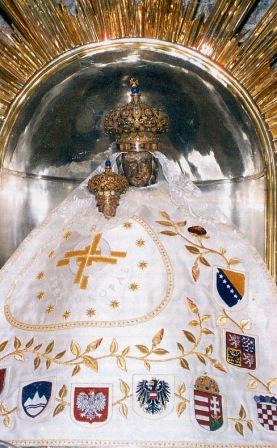 In which spirit to build?

We seek the participation of “local people” in each country: lay and religious authorities, parishes, communities, groups of Catholic action, youth movements, families. By making them share our action this way, they become attached to these little buildings, gain a real satisfaction from the work the did and become aware of belonging to the people of believers who doesn’t know any border. We can hope that they will thus take the entire responsibility of its protection and secure its continuity. The action is constant and will bear no halt: after the stage of building and restoring, we have in fact to secure the maintenance, decoration, flowering and above all the spiritual animation. It’s not only a matter of keeping this little heritage but above all making it radiant, nourished by the Spirit of the One or those, on whose behalf crosses, calvaries or chapels were built. “The Christ is the only Hope of Europe” Mariazell 2004. 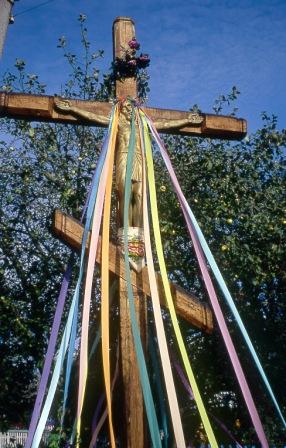 The road of Christian Europe contributing to the safeguarding of Christian symbols, is in fact an invitation to answer the call of the Christ. Without the humility of the humble servant, our action may be useless. It would even be a counter-testimony, because all those Christian symbols scattered to the four winds across Europe, however important they may be, will disappear one day. Love alone will remain, harmony in its perfection, the starting point of all the Creation and the radiant expression of the existence of God.